Thanks to The Scarab for sharing this blog post with us on senior designer Andrea Georgopolis’s Union Station project. Photography © Janie Viehman

Senior designer Andrea Georgopolis knew she was in for something special when longtime client Susan Frampton approached her about a project in the Union Station neighborhood of downtown Denver.

“I have worked with these clients on five previous homes,” Andrea said. “That is such a treat because you know them well and understand their likes, dislikes and how they live. You have built a level of trust and that always makes the job fun.”

Formerly a 14-block scar in the city’s urban fabric, Denver’s historic Union Station was underutilized for decades until voters approved a tax increase to fund a redevelopment plan that would make the area a mixed-use urban neighborhood for which Union Station would function as its hub. By knitting together a variety of forms of transportation (including the light rail, buses, taxis, bicycle routes and pedestrian networks), the development plan will turn Union Station into an urban transit district that will anchor and connect the two smart-growth neighborhoods in the heart of the city – Lower Downtown and the Central Platte Valley.

Just as urbanites love to escape the city to come to Vail, those of us from the mountains relish the chance to spend time in the city – to enjoy the amenities the mountain towns lack, especially in these revitalized areas near shopping, restaurants and sporting venues. Susan sought an urban feel, as well as a fun and comfortable space, for the condo. It’s an urban retreat and, Andrea explained, the location factored into the design.

“Although the building feels urban, the previous owner has made the unit more rustic so the task was to bring the unit back to a more city, urban design,” Andrea explained. “We repainted the entire unit, did wallpaper accent walls in the living and master bedroom, a new backsplash to work with the existing countertops and new cabinet doors in the kitchen.” 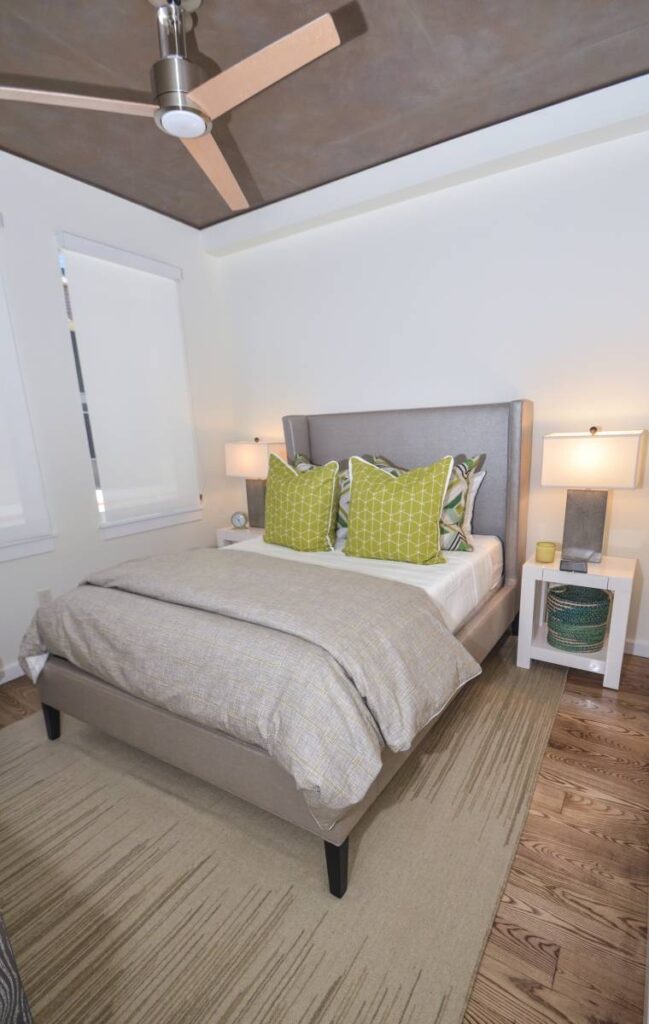 Andrea also brightened “the space up with lively, happy colors” by using “pops of orange in the living and master bedroom” and “a fun green palette” in the guest room. 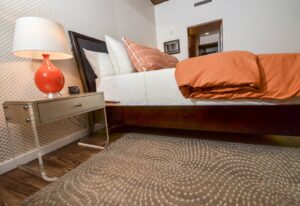 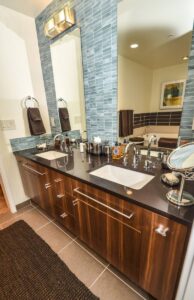 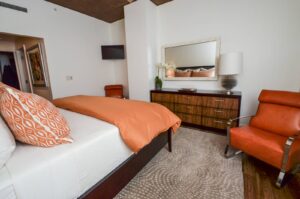 The overall feel of the space is modern with an inviting warm feel. The furniture is contemporary with warm colors, beautiful rugs from The Scarab, texture on the accent wall and woods.

Several rugs from The Scarab were used in rooms throughout the condo including in the living space, dining area and master bedroom. “The rug in the living space looks like a big splatter of colors,” noted Andrea. “It was perfect in nature because of the organic-shaped coffee table. It was fun and a little unexpected.” 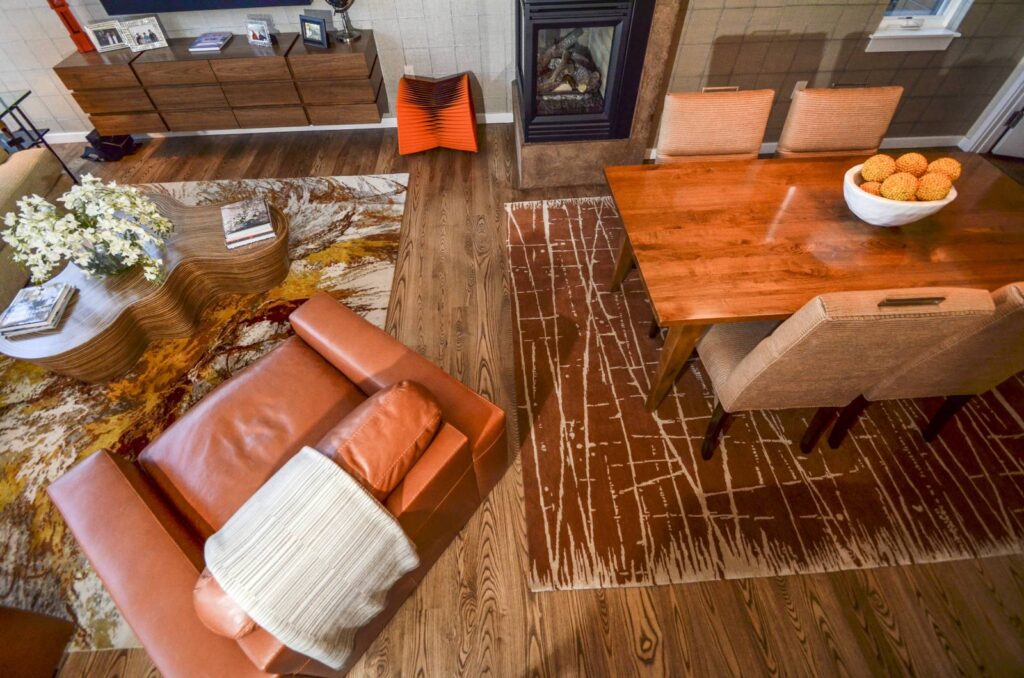 In the dining area she used the plank rug to compliment “the wild living room rug” and in the master she used a neutral swirl rug. “It was the perfect backdrop for our orange accents in the room because it has beautiful movement and because it is neutral so it doesn’t compete with other elements in the room,” she added. 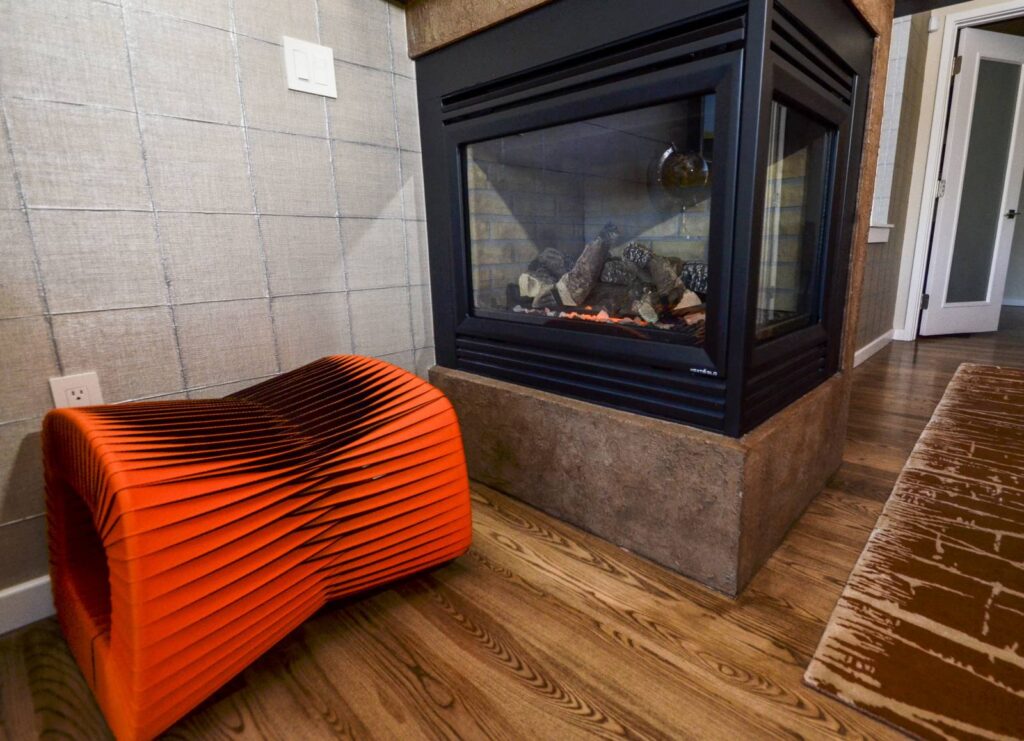 Andrea has worked with The Scarab for 15 years and credits their taste and service for the longtime relationship.

“They are the best at what they do, offering beautiful rugs and outstanding service,” she said. “It is always fun to visit the shop, to see old friends and discover the perfect rug to complement a project.”